End of an era for Salford lacrosse stick maker

A company synonymous with the game lacrosse is stopping the manufacture of wooden sticks after 102 years.

TS Hattersley, in Eccles, will finish production at the end of the month following the retirement of master craftsman Tom Beckett, one of the last wooden lacrosse stick makers in the world.

The firm has also seen a fall in demand as the sport is now more commonly played with plastic sticks because they are lighter and easier to handle.

The firm now only has one school in America that still orders the traditional wooden variety featured in the St Trinian’s film franchise.

Mr Beckett will retire on December 19 after 50 years of working for Hattersleys, which opened for business more than 130 years ago making sports equipment.

The Weymouth Road company, which will switch to plastic-only production, has marked the end of an era by producing the The Final Fifty line of wooden lacrosse sticks.

Numbered one to 50, the final 50 sticks have all been snapped up already by players, coaches and lacrosse enthusiasts across the globe, including in America, Canada and Australia.

Director Matthew Rigby said: “We decided that there was pretty much no point in carrying on making them for one school. 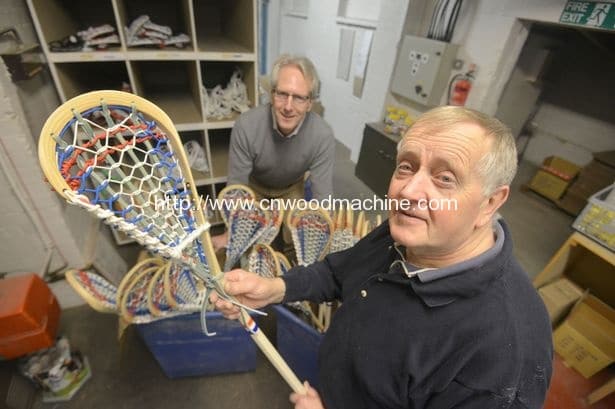 “The first plastic sticks were used in the 1970s and slowly but surely they replaced the wooden stick.

“We sold the last wooden sticks in the UK four of five years ago.

“We still supplied to St Stephen’s and St Agnes School, in Virginia, because their coach insisted that her pupils learn with wooden ones and they would order in bulk about a 100 a year.

“Then parents were told to get online to order them and we would get orders from tower blocks in Manhattan. At one point we were making 7,000 wooden sticks a year and this has fallen to 100.

“We had eight or 10 people making them and now just Tom.”

And Princess Anne, patron of the English Lacrosse Association, has played with one of the wooden sticks.

Mr Rigby added: “Lacrosse is huge in America and it came here in 1895 when Queen Victoria watched a game at Wembley and thought it was quite fun.

“Interest grew and there is a strong tradition of lacrosse in Manchester, where the English Lacrosse Association is based.”